A 64-year-old woman without any history of trauma or breast disease presented at our hospital with a progressive painful swelling of the right breast that she had first noted one month earlier. Upon physical examination, she presented several signs of infection such as high fever and lethargy. Breast examination revealed an abscesse of the right breast. Laboratory tests showed a high white blood cell count (12,000/mm) and high CRP (240). An incision of abscesse and biopsy was then performed. Histopathological confirmed the abscesse. She consulted again after five months for the same symptoms. Mammographic and sonographic appear to be benign. A quadrectomy was made. 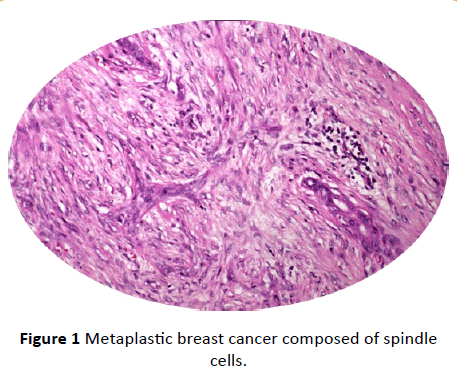 In view of the pathological findings, the patient underwent modified radical mastectomy with resection of the residual lesion in the right breast one month after the first surgery. Histopathological analysis on the surgical specimen confirmed the first diagnosis. After postoperative recovery, the patient was referred for complementary radiotherapy.

Metaplastic breast cancer is a rare disease with little published information to guide therapeutic decisions. A literature search using MEDLINE and CANCERLIT covering the years 1966-1997 retrieved 12 series published in the English language that each contained 10 or more patients. There were a total of 429 patients described in these reports. Of these, only 38 had received chemotherapy or hormonal therapy in the adjuvant setting and 24 had chemotherapy for metastatic disease. In many cases, chemotherapeutic regimens were unspecified and in no series, was information regarding response available. Our Metaplastic carcinoma of the breast is a histologically diverse group of malignancies in which adenocarcinoma is found to co-exist with an admixture of spindle cell, squamous, chondroid or bone-forming neoplastic cells. The non-adenocarcinomatous elements can be found in varying combinations within a tumor and may be present as a microscopic focus or may dominate the histologic pattern. The degree of differentiation of the metaplastic cells can also be quite variable. Due to the highly heterogeneous nature of metaplastic breast cancer there has recently been controversy regarding the classification of these malignancies. Metaplastic breast cancer is rare and accounts for less than 1% of all mammary tumors. Most of the larger published series have appeared in the pathology and surgical literature. These have provided little specific information on the non-surgical treatment of this disease. The efficacy of hormonal therapy or chemotherapy in either the adjuvant or metastatic setting for metaplastic breast cancer is essentially unknown. In this study, we review the Mayo Clinic experience in the systemic treatment of metaplastic breast cancer. We also review all published English-language case series containing 10 or more patients [1-4].

On ultrasound, metaplastic breast cancer masses often show microlobulation or sometimes discrete wellcircumscribed oval contours. Some metaplastic breast carcinoma tumors show heterogeneous echogenicity, which might indicate the presence of both cystic and solid components. At other times the echogenicity might be homogeneous, suggesting more of a solid mass.

Most metaplastic tumors of the breast are found histologically to be of a ‘high grade‘, suggestive of a more aggressive cancer. Metaplastic breast carcinoma tends to be highly cellular, featuring mitotically active, poorly differentiated, and pleomorphic spindle cells. Microscopically, metaplastic breast cancers may show various sorts of ‘cell mixtures‘. Quite commonly metaplastic breast tumors show a squamous cell type differentiation. They might also feature prominent ‘matrix-producing‘ type cells, or carcinoma sarcomatoid cells (carcinoma sarcomatoid cells include both epithelial and mesenchymal features). Sometimes metaplastic breast cancer tumors will feature predominantly spindle cells or a mixture of spindle cells with matrix-producing cells. If the mass appeared to show ‘heterogeneous echogenicity‘ on ultrasound, one could well expect to see necrosis and cystic degeneration at histopathology.

Fine needle biopsies are usually sufficient for diagnosis, and unlike malignant myoepithelioma, the mesenchymal component in metaplastic carcinomas will express epithelial markers, at least focally. However, some physicians will still prefer to take an excisional biopsy in suspected metaplastic breast cancer, especially in cases where there is a possibility of associated necrosis or hemorrhage.

Fine needle aspiration biopsy is an acceptable diagnostic approach with metaplastic breast tumors, as the chances of finding a distinct carcinomatous epithelial component from anywhere in the tumor are good.

The surgical treatment of MBC has largely paralleled that of IDC. With the publication of NSABP B-06 trial results, the surgical approach to IDC shifted from mastectomy to breast conservation therapy for appropriate patients. Large tumors (≥ 5 cm) are a relative contraindication to breast conservation therapy and even less extensive tumors may preclude breast conservation in smaller-breasted patients. These guidelines are particularly important for MBC patients, as they typically present with larger tumors compared to their IDC counter parts. As one might expect, relative to those with IDC, a higher percentage of patients with MBC receive mastectomy rather than lumpectomy.

Despite the larger tumor size at presentation, MBC histology should not preclude breast conservation therapy in appropriate patients. Tseng and Martinez found no difference in overall or disease-specific survival whether MBC patients were treated with mastectomy or lumpectomy, even after controlling for known prognostic factors. Similarly, Dave et al. found no difference in overall or disease-free survival between patients with MBC undergoing either modified radical mastectomy or breast conservation therapy.

Several studies have demonstrated lower rates of axillary lymph node involvement among patients with MBC relative to IDC. Tseng and Martinez reported axillary lymph node involvement in 22% of MBC patients. Pezzi et al. also demonstrated axillary lymph node metastases in 22% of those with MBC versus 34% of those with IDC and further noted that nodal positivity was more common among the carcinosarcoma variant. Despite this, Beatty et al. demonstrated that SLNB and ALND are used equally in patients with MBC relative to women with IDC. Tseng et al. showed that women with locally advanced MBC (i.e. primary tumors >5 cm and/or four or more metastatic axillary nodes) who underwent postmastectomy radiation therapy had improved survival relative to those not receiving such radiation.

There are little data that standard breast cancer chemotherapy regimens utilized for IDC are effective for women with MBC. Compared to stage-matched women with IDC, those with MBC receiving adjuvant chemotherapy have poor survival. Nevertheless, 33% to 86% of MBC patients receive chemotherapy and are, in fact, twice as likely to receive chemotherapy as similarly matched patients with IDC. Single institution retrospective studies and genomic profiling suggest that these tumors are largely chemoresistant. A report from the Mayo clinic detailed 27 patients treated at their center over 20 years in which 33% received chemotherapy. Ten different regimens were used, resulting in one partial response. This resistance to chemotherapies is likely a product of the complex genetic and nongenetic mechanisms within MBC that result in phenotypically diverse subclones and intratumoral heterogeneity. Hormonal therapy is just as ineffective as chemotherapy, and generally has no role in the management of patients with MBC. With most metaplastic carcinomas of the breast, however, estrogen and progesterone receptors are not very evident. Her-2 is also typically absent in metaplastic breast tumors. Most metaplastic breast carcinomas are therefore ‘triple negative‘ to speak. However, metaplastic breast tumors do tend to express the HER1/ EGFR (epidermal growth factor) receptor at a considerably higher rate than most other types of breast carcinoma, and this is a somewhat unique histological identifier for this type of breast cancer, and may lead to some new and potentially beneficial treatment strategies [5-8].

It is a rare subtype of invasive breast cancer that accounts for less than 1% of all diagnoses. It is characterized by a larger tumor size at presentation, lower rates of axillary nodal involvement and higher rates of both local and distant recurrence. Further research studies will be required to develop targeted treatments with the goal of improving clinical outcomes.