Cystic lymphangioma is a common congenital entity related to maldevelopment of lymphatic system of an organ or region. It is usually secondary to lack of drainage of larger lymphatic vessels in to venous channels. Cystic lymphangioma of breast (CLB) is however a very rare entity with only few reports describing radiological appearances existing in medical literature [1-5]. Hence in this article, we have made an attempt to describe the characteristic radiological features of CLB and its features simulating carcinoma breast.

A sixteen-year old female came to the surgical outpatient department of our hospital with a 3-4 months history of painless right breast lump. There was no history of any fever or nipple discharge/retraction. There was no family history of breast cancer. Clinical examination revealed soft to firm, nontender, massive enlargement of right breast with bluishblack discoloration of thickened skin that also revealed small vesicles and small, patchy areas of sloughing (Figure 1). Palpation revealed a diffuse mass epicentered in the outer quadrants of right breast with extension in to the axillary tail which was not fixed to the underlying chest wall. No evidence of any obvious clinically palpable axillary adenopathy was noted. Left breast was clinically normal. Blood examination was also unremarkable. Young age of the patient prompted the clinicians to refer her for high-resolution ultrasonography of breast or sonomammography (SMG) before X-ray mammography (XRM). 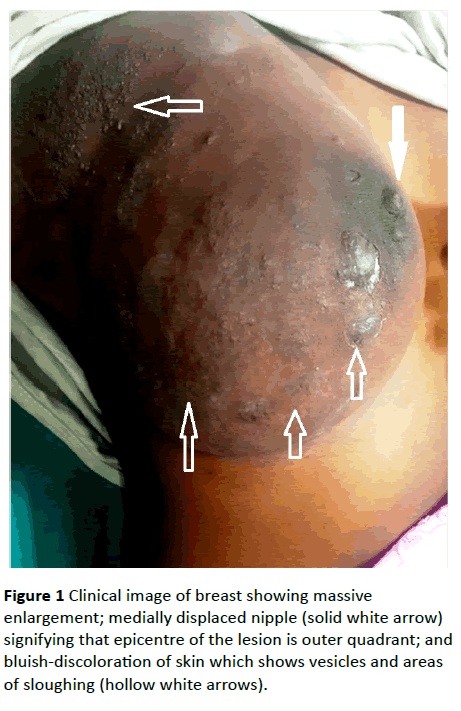 SMG revealed ill-defined, diffuse, heterogeneous area of echogenicity occupying the entire right breast but epicentered in the outer quadrants with extension in to the right axillary region. The mass was seen to insinuate in to the normalappearing, sparse breast parenchyma. Ill-defined areas showing cluster of small cystic lesions and dilated ducts were noted at multiple locations in the right breast in addition to a hypoechoic spiculated mass measuring up to 4.5 × 3.0 cm and few anechoic, smooth-walled, branching, lesions without mural nodule in superolateral quadrant with extension in to axillary tail of breast without evidence of any obvious internal or peripheral vascularity on color Doppler imaging (Figure 2). No evidence of any obvious micro/macrocalcification or axillary adenopathy was noted. There was thickening of cutaneous/subcutaneous tissue complex that was seen merging with the mass. Elastography revealed mild hardness of breast tissue; except for moderate hardness in the spiculated mass (Figure 3). However, since no explanation for spiculated mass could be suggested, hence to rule out the remote possibility of carcinoma breast and to detect micro calcification, XRM was performed which though suboptimal due to macromastia but it revealed ill-defined, heterogeneous mass occupying nearly the entire right breast inseparable from normal breast parenchyma without obvious signs of micro or macrocalcification (Figure 4). 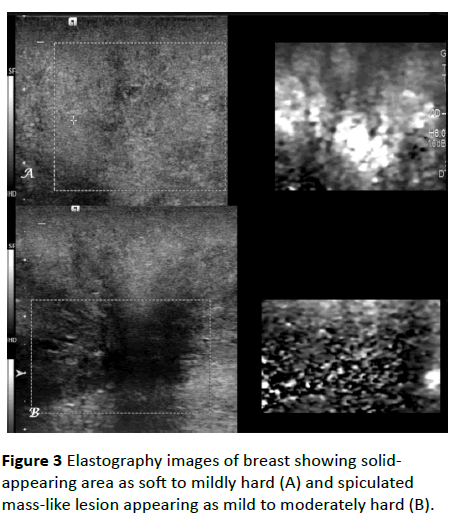 Figure 3 Elastography images of breast showing solidappearing area as soft to mildly hard (A) and spiculated mass-like lesion appearing as mild to moderately hard (B). 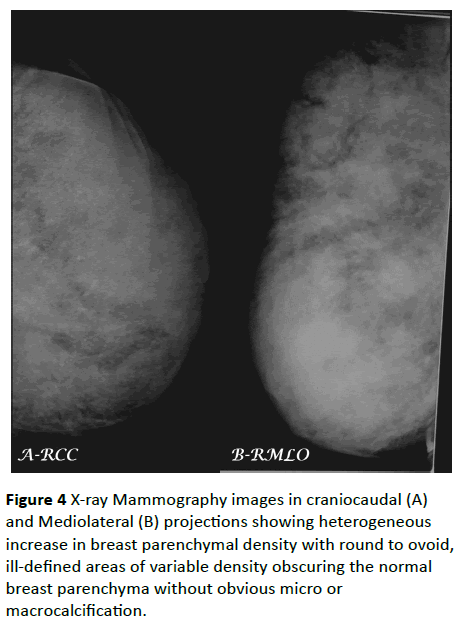 Figure 4 X-ray Mammography images in craniocaudal (A) and Mediolateral (B) projections showing heterogeneous increase in breast parenchymal density with round to ovoid, ill-defined areas of variable density obscuring the normal breast parenchyma without obvious micro or macrocalcification.

Contrast-enhanced magnetic resonance imaging of the breast was then performed which revealed ill-defined, heterogeneous mass interspersed with and inseparable from normal breast parenchyma showing fluid-intensity areas - both branching tubular and cystic in nature extending in to the right axillary region with some of them appearing hyper intense on both T1W and T2W images signifying thick-proteinaceous content (Figure 5). The mass revealed postcontrast enhancement on delayed images that was lower relative to the normal parenchyma of left breast without obvious areas of avid/significant enhancement on early postcontrast images ruling out any malignant etiology (Figure 6). MRI revealed more extensive but non-aggressive nature of the lesion as compared to SMG which was seen extending deep to pectoral muscles and in to the right axillary space. No evidence of any significant adenopathy was noted. Based on the above findings and careful extraction of the history that the girl was born with a small nodule in right breast region at birth gradually increased with advancing age to the current size, a confident diagnosis of cystic lymphangioma was considered as the first differential diagnosis.

Fine needle aspiration cytology from the mass revealed lymph-like fluid with numerous lymphocytes without obvious signs of any atypia, potentiating the diagnosis of CLB. Due to cosmetic reasons and patient apprehension, debulking of tumor/excision through surgical means was planned which revealed mass insinuating between the normal breast parenchyma showing multiple, dilated, branching tubular and cystic spaces filled with lymph-like fluid with intervening areas of fibrosis. Histopathological examination confirmed the clinicoradiological diagnosis and revealed areas of dense fibrosis that was sonographically masquerading as carcinoma. Postoperative period was uneventful with unremarkable clinical examination at 2-weeks after which the patient was lost in follow-up.

CLB, also known as cystic hygroma is an uncommon, benign, congenital lymphatic malformation of breast consisting of tubular and cystic-dilatation of lymphatic ducts in the breast parenchyma which along with subareolar ducts drains in to axillary region [5-7]. These lesions are usually noted in the outer quadrants of the breast region at birth with their significant progressive enlargement by early childhood with very few cases detected in adults [1-10] or in inner quadrants of breasts [1] or in males [11]. Few cases with secondary infection have also been reported [10].

XRM is usually nonspecific revealing fairly or ill-defined, round or lobulated densities interspersed between the normal breast parenchyma without obvious signs of micro or macrocalcification [8,12]. In many cases, axillary and posterior forbidden areas may be unreachable due to macromastia.

SMG may reveal ectatic and non-compressible, lymphatic ducts converging towards the axillary region appearing anechoic or hypoechoic secondary to proteinaceous or hemorrhagic fluid [8,12]. When the microscopically-dilated lymphatic ducts are beyond the resolution of ultrasonography, the area appears highly echogenic and solid but elastography will reveal only mild hardness of tissue. In our case, tubular and cystic dilatation of lymphatic ducts was interspersed with solid-appearing areas of microscopically dilated ducts with surrounding fibrosis due to chronicity that appears hypoechoic and moderately hard on elastography. When this fibrotic, hypoechoic area is large enough then it may mimic breast carcinoma as seen in our case but carcinoma is usually very hard on elastography. In early cases, cystic areas may mimic fibrocystic disease of breast which is usually bilateral or hemangiomatous lesion which shows vascularity on power Doppler imaging.

MRI is the modality of choice for evaluating breast masses like CLB as it not only aids in diagnosis (differentiating between benign and malignant) but also in determining their extent. CLB usually appears as cystic septate masses with variably ductal dilatation and only septal enhancement with some of the ducts/cysts showing hyper intense content on both T1W and T2W images due to proteinaceous or hemorrhagic contents as seen in our index case [12]. However, ringenhancement may be noted in cases of secondary infection in CLB. As these tumors are usually present at birth, so careful history taking is very significant. Delay in diagnosis is associated not only with increase in size of tumor but also development of normal breast tissue which get mixed accounting for the heterogeneous pattern of tumor and macromastia.

Though complete surgical excision is the management of choice due to low recurrence rate yet due to the infiltrative nature of the lesion, a combination of sclerosing procedure and surgery or sclerosing procedure alone may be considered depending upon the size of the lesion [2,13]. No evidence of any malignant degeneration in cystic lymphangioma has been reported in the reported cases.

Microscopically, lymphangioma may be simple consisting of multiple, small, capillary vessels; cavernous showing cluster of dilated lymphatic ducts with surrounding fibrous capsule and cystic consisting of well-defined, cystic spaces lined by flat endothelium showing lymphocytic or proteinaceous, eosinophilic fluid without obvious surrounding capsule but with intervening dense fibrocollagenous stroma; latter infiltrated by inflammatory cells in cases of infected CLB [8,10]. Differentiation between cavernous and cystic type is considered arbitrary by some authors as persistence of cavernous lymphatic spaces for long duration of time may result in cystic spaces with loss of capsule [13].

Histopathologically, the tumor consists of multiple, cystic lymphatic spaces along with thin and thick-walled, dilated, lymphatic ducts lined by single-layer of flattened, endothelial cells and filled with proteinaceous, bright, eosinophilic fluid and lymphocytes predominantly. On immunohistochemical staining, the lining cells of lymphatic spaces/ducts are CD34 positive. Significant amount of fibrocollagenous stroma infiltrated by lymphocytes, plasma cells and polymorphs is noted interspersed between the lymphatic spaces/ducts along with islands of adipose tissues and normal breast lobules in cases of cystic lymphangioma of breast.

Though cystic lymphangioma is a rare breast lesion yet its characteristic radiological features may help in correct diagnosis except when fibrotic, hypoechoic areas may masquerade breast carcinoma that may be differentiated by elastography or it pattern of enhancement on MR images. Early recognition results in appropriate management and prevents extensive surgical treatment.